The centerpiece of the study is a focused pilot in Delaware that will also include regional stakeholders. Participants will have a choice of technology to record their miles driven during the three-month pilot. In addition, each technology option will offer a variety of services and amenities for participants, such as visual trip logs, driving scores, and vehicle health monitors. Pilot participants will not make any actual payments as part of this study. Rather, “faux” invoices will be sent out monthly showing what they would have been charged under a mileage-based system. The main purpose of the focused pilot is to provide a better understanding of how a mileage-based user fee might work in real life. We’ll learn how participants feel about things like receiving an “invoice” for road usage and if they think the system seems fair. Following are the technology options that participants will be able to choose from as part of this pilot.

You can also download a two-page handout about the options here.

A device designed to plug in to a vehicle’s OBD-II port that automatically calculates the mileage-based user fee (MBUF) based on the state(s) where the vehicle was actually driven. The device combines the mileage data and fuel consumption data stored in the vehicle’s computer with the location of the miles driven using a GPS chip. Taking the recorded mileage and location data, along with the amount of fuel consumed, drivers pay for their miles driven based on the actual state(s) in which they drove and receive credits for fuel taxes paid. A location-based MBUF enables funds collected to be accurately distributed to where road wear and tear occurs. In addition, location capability provides the widest array of value-added amenities for drivers.

A device designed to plug in to a vehicle’s OBD-II port that automatically calculates the mileage-based user fee (MBUF) based on estimates of the state(s) where the vehicle was driven. The device accesses mileage data and fuel consumption data stored in the vehicle’s computer and applies assumptions about the percentage of in-state and out-of-state travel. Without location data, drivers pay for miles driven and receive credits for fuel taxes paid based on estimates of where the travel occurred. The non-location MBUF reduces privacy concerns regarding trip data, but does not provide an accurate connection between the funds collected and where the road wear and tear happens. Not having the location technology also limits the number of value-added amenities available for drivers.

An app downloaded on the driver’s smartphone that works with a credit card-sized device (beacon) to automatically calculate the mileage-based user fee (MBUF). The smartphone uses GPS to measure mileage and record in which state the miles are driven. The beacon is used to tie the Smartphone app to a specific vehicle; otherwise trips taken with the smartphone via other modes or vehicles (i.e. train or in another vehicle) will be billed for that additional mileage. To work correctly, the beacon and smartphone must be in the vehicle. Combining the recorded mileage and location data with official vehicle fuel consumption ratings (as determined by the EPA), drivers pay for their miles driven based on the actual state(s) in which they drove and receive credits for fuel taxes paid. A location-based MBUF enables funds collected to be accurately distributed to where road wear and tear occurs. Since there is no connection to data stored in the vehicle’s computer, several value-added amenities (e.g., vehicle health, battery performance, safe vehicle zones) are not available for drivers. 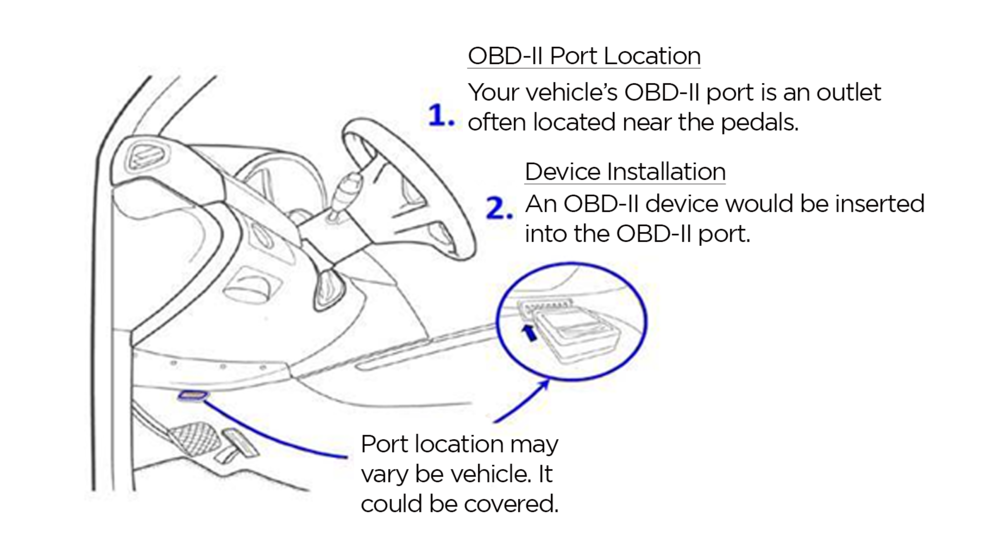 What are value-added amenities?

With watches, phones, ride hailing apps, and on-demand services, we are more connected and more demanding than ever before. Currently, tons of information is sitting within our vehicle, but remains out of reach for most drivers. Value-added amenities break down the barrier between the vehicle and driver by creating tools such as a battery life monitor, check engine message decoder, trip logs and vehicle safe zones. The same technology used to create these value-added amenities can also calculate a mileage-based user fee. The relationship between value-added amenities and MBUF is being explored in pilot studies.